This is a super speedy, family friendly soup, suitable for even the most novice of domestic goddesses. The only appliance you’ll need (in addition to a hob) is some kind of blender. I use a stick blender for soups to save on washing up but a standard blender or food processor would work fine too.

I’ll be honest, this is a complete leftovers soup based on bits and bobs I had left in my fridge and inspired by the half a tin of green lentils I had leftover from the quinoa salad I’d made on Wednesday!

Start by roasting the parsnips and garlic, this is an optional step but takes little effort and adds a flavour punch. Just pop the chopped parsnips (I chopped mine into 1/2 cm rounds to make them cook quicker) in a roasting tin with some olive oil. Then crush the garlic cloves, skin on, with the back of a knife or wooden spoon and add to the parsnips. Pop them in the oven at 200C/GM6 whilst you do the rest.

Now pop some oil in a large saucepan and add the chopped onion and celery, let them cook over a medium heat until they soften and the onions are translucent (about 5 minutes). 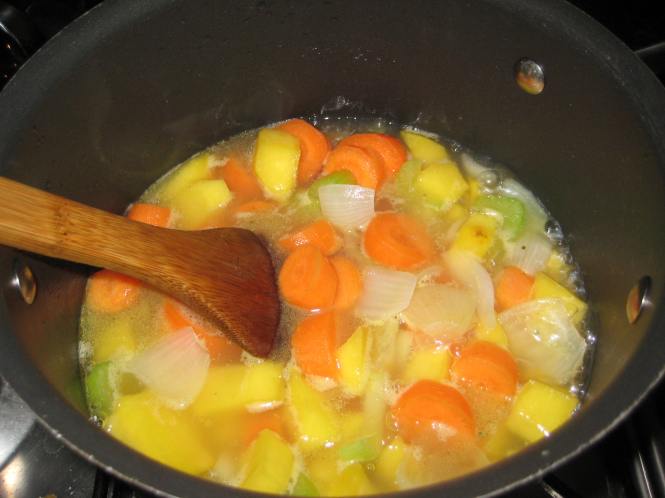 Then add the rest of the ingredients. The swede, carrots, lentils, water, stock and cumin (if you don’t have pre-cooked lentils I’d suggest you cook them with the onions, celery and water for ten minutes before adding the remaining ingredients). Bring them all to the boil and let them simmer for around 15 minutes or until the swede and carrots are soft enough to blend.

Finally add the roasted parsnip pieces and remove the skins from the garlic before popping them in to the mixture too. Give it a final taste and season then blend it and serve.

I served mine with a swirl of chilli oil, salt and pepper but left Isaac’s plain. This soup got a big yes vote from Isaac too because of all the sweet vegetable ingredients, he lapped the soup up without stopping for the toast and butter soldiers!

Here he is giving it the vote of approval: “Mmmmmm … nice!”