AS a pre and post natal exercise specialist, NCT volunteer and mum of young children, I’m often surrounded by birth stories. Good, bad and ugly. I had polar opposite experiences with the births of my children, so before the memories fade, I thought the time was ripe to pen my experiences.

Just over 3 years ago I gave birth to my first child, Isaac. I had read all the stuff, done the courses, trained appropriately throughout my pregnancy, eaten well and continued with my Pilates until one month before his due date. Sadly, his birth didn’t go according to my plan and whilst I knew after the event that I was pretty traumatised, it wasn’t until I had a euphoric birth with Naomi that I realised just how much his birth had affected me and our initial bonding.

His was a typical back to back labour. My waters broke prematurely and my labour made slow (virtually no) progress. The contractions I had did little to bring on Isaac’s arrival, instead they just hurt like hell. By the time I gave birth I hadn’t slept for three nights and no matter how I tried, I could eat very little to sustain my energy. When your digestive system shuts down, it shuts down! I ended up being induced. First with gels, then with a drip and although I was given an epidural, it didn’t do anything. The final 3cms to fully dilated part of my labour happened in just under two hours and then I was pushing for another two. I won’t go into detail but the swelling was heinous and I had to push him out from a very peculiar angle. He came out hand first causing additional damage which took a while and lots of stitches to recover from (and inspired my fascination with all things pelvic floor and keeping women’s bits intact). BUT … I did push him out on my own, with no episiotomy or forceps.

It took me around six weeks to process his birth and to finally acknowledge I was proud of myself. Whilst it affected our initial bonding, once I’d accepted his birth the love hormones kicked in and I’m still falling in love with him a little more every day.

So when it came to Naomi’s birth – you can understand I was a little anxious! I didn’t really know what real labour felt like and was frightened of having a similar experience.

I went into labour naturally on the evening of 21st January. I’d been having practise contractions since before Christmas but was aware things felt more intense and the queasiness I’d felt throughout my pregnancy was back in earnest. I nibbled on my dinner in stages, drank lots and went to bed.

At around 11pm the contractions were every ten minutes. Rather than panic I took some paracetemol and decided to sleep through it (ha ha). This wasn’t really happening so I pottered downstairs so as not to disturb my husband or son and closed my eyes on the sofa. As the night progressed I read, sewed, nibbled on a banana (I’d learned from Isaac’s birth to eat what I could) and made sure all our bags were packed!

By 2am the contractions were hard to handle. We got the Tens machine going and with that and lots of positive mind talk I got through to around 6.30am on my own. At this point we called the birthing unit and my mum and dad who were going to have Isaac for us.

After a challenging but blissful shower, we made it into the car and promptly got stuck in rush hour traffic. It was a very silent, tense car journey!

At 8.50 we made it to the birthing unit. Still not sure if we’d be staying! The contractions had slowed down in the car but I was told this was very normal. I had a little cry on arrival (the fear) and then they left us to recover.

After around half an hour we were back in business. I still hadn’t timed anything so when our midwife came in and told me the contractions were lasting a minute each I was amazed! Again, she left me to labour on rather than intervene which helped me to relax and made me feel more confident. All the time I was literally nibbling crumbs of a biscuit and sipping water to try to stay strong.

By 10.15 the midwife examined me. I was 5cms dilated and ‘ripe’. I was elated to have made it this far on my own. She ran the pool and offered me gas and air (I accepted) and at this point I was suddenly aware of the contractions going through the roof. Although strangely it was as if they were happening in another room (that’s drugs for you).

My husband called my mum to let her know we were in business!

To cut a fairly short story short, within what felt like minutes the contractions escalated and felt pretty effective. I’m sure it was as a result of relaxing because of the gas and air. When I got into the birthing pool it felt heavenly. Yes I was in pain but the combination of gas and air and warm water was incredible. Again – I relaxed and again, I felt the contractions intensify. This time I felt like I couldn’t help but push.

At some point the midwife left the room (I assume to get another midwife given I’d mentioned the urge to push) and on the next contraction I felt my waters pop and immediately after a head crowned. My baby’s head (we didn’t know the sex). Aware of this and high on gas and air it was a challenge to communicate to my husband what was going on. ‘PUSH THE BUTTON’ I kept saying.

When the midwife returned (quickly) she said, ‘ooh, there are the waters,’ and then, ‘Oh and there’s a head.’ Much to my relief.

On the next contraction I didn’t have to do anything. Baby’s head slowly came out. I instinctively sat back and felt her head (truth be told I actually starting pulling but was quickly told to stop that). Then on the next contraction she came out and I held her in my arms. I’m welling up writing this now. The moment was intense. Tears. Elation. Relief. And a thank you God!

We had a little girl. Naomi Mae Akua Laing.

I tried to deliver the placenta naturally but sustained a pretty bad bleed so needed some assistance at this point. I lost around a litre of blood so had to stay in over night but had just a couple of grazes other than that.

The difference I felt between Isaac and Naomi’s birth was instant. I was euphoric and totally in love with my baby girl. But I also know that I learned from Isaac’s birth and he also paved the way. From just over 48 hours of labour with Isaac and 2 hours of pushing. I had 12 hours with Naomi and 4 minutes of ‘pushing’ (I officially went from 5cms to crowning in 40 minutes).

I don’t plan any more children. My body has had enough and I’m beyond grumpy when I’m pregnant but I’ll never forget that euphoria. Now I’m absolutely content and blessed with my beautiful family. 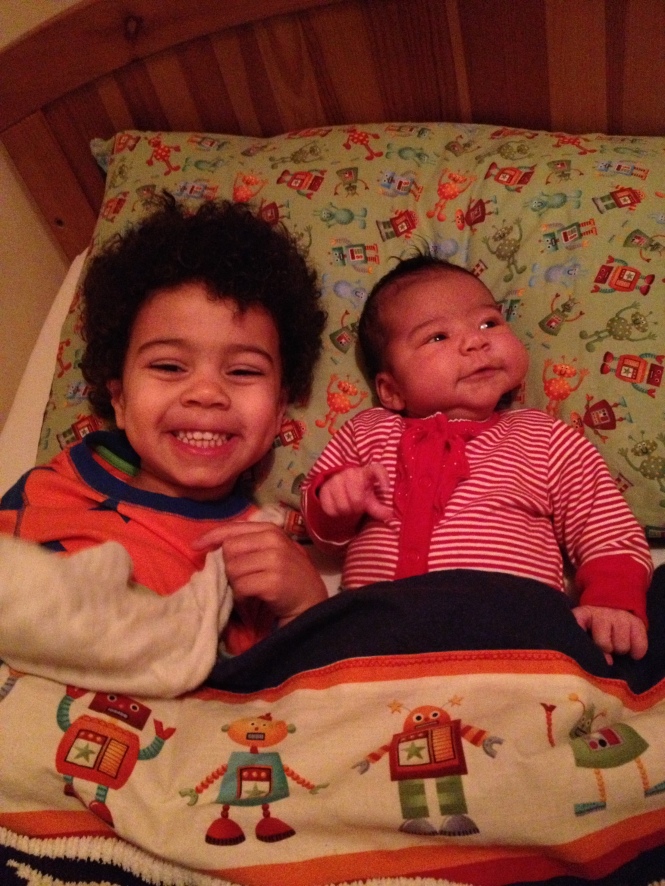